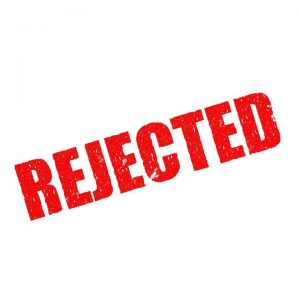 Nobody likes to feel rejected. We don’t care if it’s getting rejected for love, getting your credit card rejected, or getting picked last to play kickball. Regardless of how serious the situation is, rejection sucks. If there is an area where rejection is worse, though, it would be the world of dating. It always stings a bit more and feels far more personal than some other situations.

What we’d like to talk about today is how you deal with this rejection. We’re going to give you some tips to keep your head up, not let it get to you, and to keep pushing forward in the search for someone special. Rejection is a part of life, and the sooner you learn to deal with it properly, the sooner you’ll find some real success dating and in the rest of your life. We’ll get off of our Dr. Phil soapbox now and give you the tips.

This is the absolute hardest thing to do in the world outside of maybe folding a fitted sheet. While rejection usually feels personal, it’s usually far from it. When you ask someone out, and they say no, do you automatically assume it’s because they don’t like you? If you’re a normal human being with a pulse, you probably do.

The idea is that there are thousands and thousands of reasons that they could be saying no. You may think they are rejecting you, but most of the time they are just rejecting the situation which has nothing to do with you.

And what happens when that isn’t the case, and they really aren’t interested in you? So. What! When we go to pick out a new shirt and see one we don’t like, should the designer get offended? No! People have different tastes, likes, and dislikes. If that weren’t the case, we would all wear the same clothes because we had identical likes and dislikes. The fact that we don’t is what makes this world beautiful.

You can’t allow yourself to be upset just because someone that you like doesn’t have the same feelings for you. It does not mean there is anything wrong with you. It just means that person isn’t the right one for you. End of story.

What to Do When You Get Rejected

Lastly, you need to keep your head up. If you haven’t mastered not taking it personally yet, that’s ok. It’s going to take time, and we’re all human. What you need to make sure, though, is that you don’t let it damage your confidence and cause you to approach future potential dating matches more timidly. Keep your head up, remember that you are special, and remember that there is someone out there who is going to go crazy for the opportunity to spend time with you. You just have to find that person.

One Final Tip to Deal With Online Dating Rejection

One of the reasons that people struggle with rejection online even more than in the real world is that they allow their minds to run wild during the process. They’ll have one conversation with a person, look through their pictures, read their profiles, and suddenly decide they are the man or woman of their dreams. Their minds will make assumptions and will always make the assumption that fits their fairytale narrative the best.

While it’s fun to speculate on what could be, it’s a recipe for disaster. You end up propping someone up on a pedestal that they may or may not deserve to be on. The greater that you think someone is or that your mind makes them out to be, the more it hurts when they aren’t interested. Stop doing this to yourself. Allow the person to be who they really are and stop letting your daydreaming get you in trouble.

Rejection should not be personal. Yes, it’s easier said than done, but it’s also easily conquered. Realize that it’s not personal, keep your head up, and move on to someone else that feels the same way about you that you do about them. You’re not going to find Mr. or Ms. Right on the first message unless you are the luckiest person on the planet. That means you’re going to have to go through some no’s to get to the yes’s.